Cardano, the decentralized public blockchain and cryptocurrency project launched by Binance Futures, is creating headlines yet again. The Altcoin Cardano, referred to as ADA, has shown significant positive progress in the very first month of the new year.

According to its results for January, the crypto project has seen a massive jump in its price by around 47%. It has soared from $0.033 at the beginning of the year to the current price of $0.057(as of February 2nd).

The cryptocurrency’s market capitalization is now at an impressive $1.495 billion. It has been of the many coins that witnessed an affirmative market push in the new year.

To understand this phenomenon, one must look at the chart, which represents the movement of the coin since the beginning of 2020.

The below table shows that not only has Cardano’s strengthened trend has been dominating the market for the second month in a row. What is also significant to note is that ADA made it to Top 10 cryptocurrencies last week, according to CoinMarketCap. 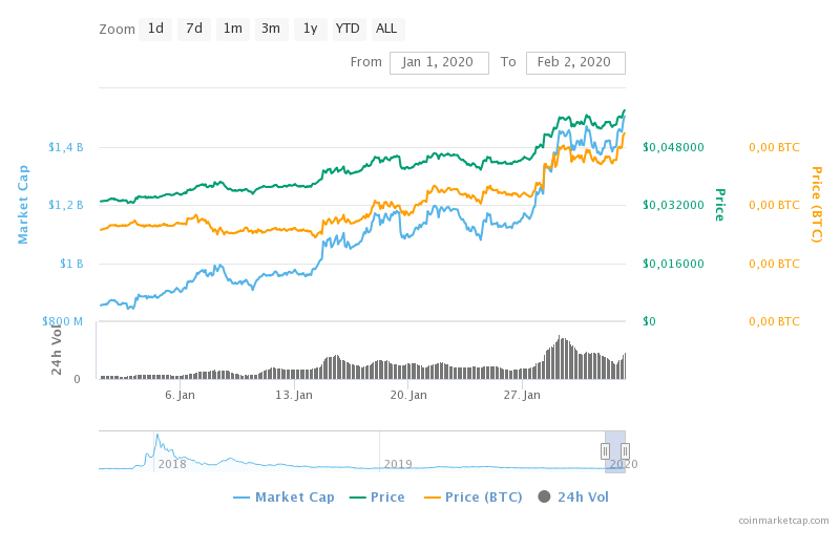 The Altcoin’s value continues to rise, but transaction activity in the Cardano network is still very week. Software Developer Joshua Hensley discovered this trend. He examined data and concluded that the miners of the network have been mining mostly empty blocks.

In a best-case scenario, Hensley stated that only one or two transactions are part of a block. The only exception to this seen in blocks with ten transactions that appeared periodically.

This leads to miners mining a large number of blocks with a record low number of operations. The latest data revealed that only 3057 transactions recorded in the 4320 blocks that mined, thus suggesting that the actual use of the coin is very less.

Charles Hoskinson, the Cardano founder, recently boasted in an event about the altcoin team’s partnership with the giant PwC. It then predicted that the company and its users would shift to the Cardano blockchain for their operations.

However, this has not exactly materialized. Therefore, the real application of the network is continually deficient. Thus, the price rise can be attributed to ordinary speculation

Asian Markets to Play a Formidable Role in the Crypto Investments