What made Jae Kwon Resign as the CEO of Cosmos (ATOM)?

The co-founder and CEO of Tendermint and InterChain Foundation have made it official that he will step down from the COSMOS as CEO to work on a different project. COSMOS was built under Tendermint and stood as an internet platform for the Blockchain.

The Cosmos project aims to provide a secure and scalable environment that also supports interoperability among thousands of Blockchain for the issue of new token and community. The original plan of Jae Kwon was to complete the identity conversion before emerging in public.

But the twitter handle of DailyDefi.eth made it public that Jae Kwon was leaving the COSMOS stream to develop the project of Virgo. Jae Kwon forcefully made to comment on the issue, and he stated in reply to the post that he was planning to leave only after the transition completed and yet is still active as the ICF council member. He also shared that he was working in the background of COSMOS rather than developing with the core members. 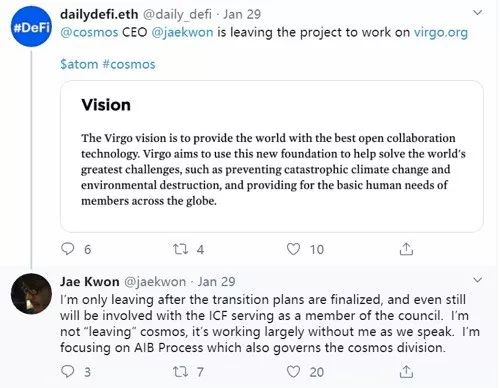 Why is Jae kwon leaving Cosmos?

According to analysis, Jae Kwon might have had three reasons to agree to the resignation. The main reasons include that Jae Kwon believes that the role of CEOP is much diversified in the company; the project of COSMOS can run independently from its parent firm Tendermint.

Jae is also shared that he might finally resign from the post after the project stabilizes in the market, and later, he will continue to be the member of the board an participate in legal and internal matters.