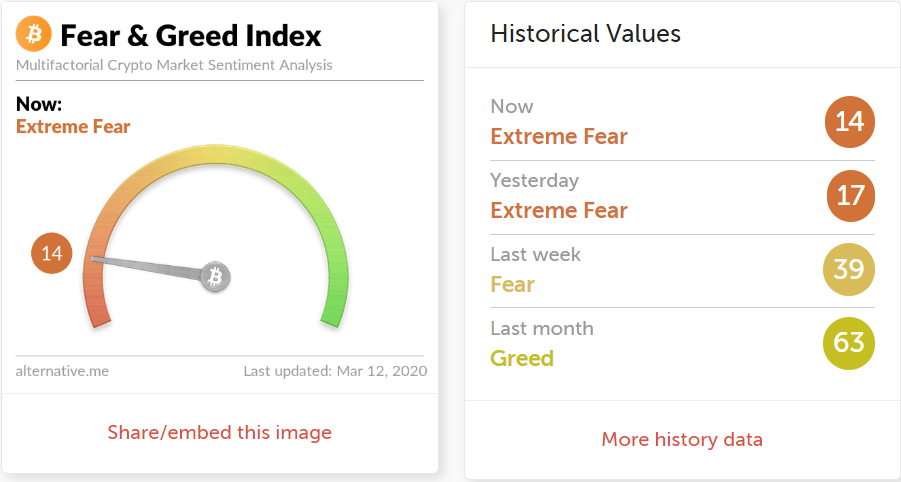 The long-term predictions of bitcoin reaching the level of $6k were felt like a joke when the largest crypto asset in the world was at the price level of $10k. But now, the joke has turned into reality and BTC has touched the price level of $6k with the crypto market crash. Many of the known analysts and traders predicted that after reaching the level of $6k bitcoin will find support to reach $10k and every crypto investors is in the same hope. The sudden crash in just one hour has completely shocked the cryptoverse and hopes to avoid any further downfall.

Ether has touched its December 2019 price level of $130 destroying all the bullish momentum gained this year. The magnitude of the downfall is said to be around -30.00%. The market capitalization is $15,188,310,376 and volume traded of $20,311,366,011. The downfall below $200 mark indicated that a major bearish trend is coming for ether and proved itself by the downtrend in today’s market. Ether broke all the support levels ranging in between the price of $200 and $150.

It’s beyond imagination that how one of the top-performing altcoin of this year is now on its bearish level of $1.50 with an overall loss of -33.29$. The bearish market has forced the majority of the altcoin to reach its critical support area for the year. Tezos is now at the price level of $1.50. A cryptoasset that was moving around the price level of $4.00 is now at $1.50 just explains the impact of today’s downfall in the market. The market capitalization is $1,192,284,403 and volume traded of $239,229,825. The XTZ/BTC also faced a significant decline as it plunged -13.39%.

The cryptomarket is been witnessing impacting downtrend for the past few days. Heavy losses and downtrend in the price are being major concerns for the market as of now. However, looking at the other side, we can now expect that bulls may come back and make the much-required price recovery actions. Bitcoin has reached its critical support level of $6k, Ether has also reached its critical support level of $130 and other major altcoins are also on their sensitive low price levels. This may pull some buying volume for the crypto assets in the market.