The ADA prices started climbing gradually and tried to cross the resistance level of 0.03240 and did succeeded but failed miserably to maintain stability and got completely exposed to volatility in the price levels.

The bulls get the momentum through its new support level of $0.03190, it provided a major bullish momentum to ADA prices to achieve further heights but it will is tested by the prices many times as the acquired a bearish momentum and started falling towards it.

ADA prices are currently facing strong resistance near the levels of $0.03240 and 0.03250. Currently, prices are trading below the level of 0.0320. If bears manage to break down the support level of $0.03190, there will be a medium-term bearish dominance again the ADA prices. 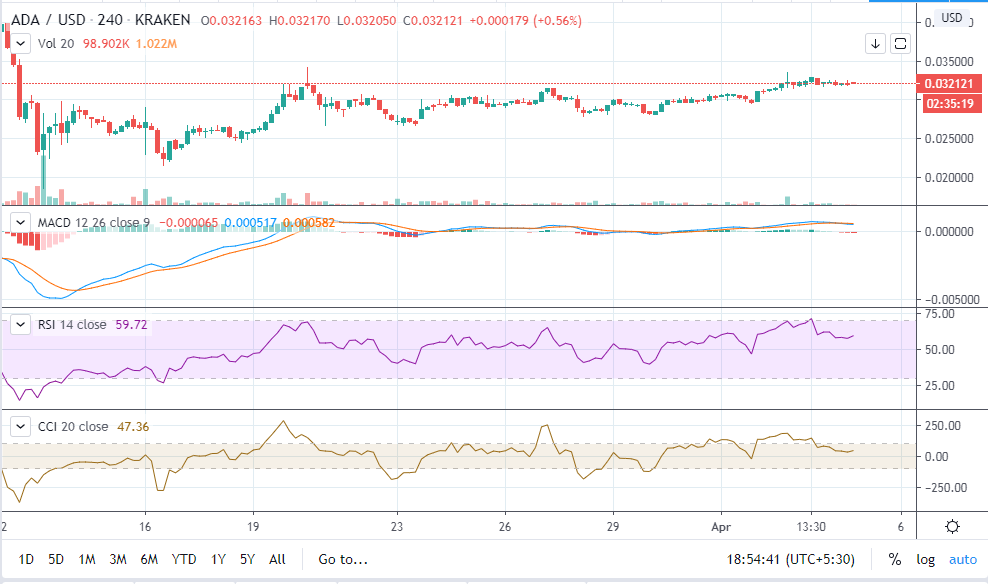 There is a gradual decrease in all aspects of the chart after suffering heavy volatility which is a negative indication as there are chances bears can again emerge strongly and can establish there hold in prices.

There is an increase in the selling volume according to the moving average and oscillators, which is one of the major reasons for today’s bearish momentum.

MACD levels are  showing bulls and bears are faced each other and selling volume came out as the winner.

The 24hr-CCI suffering a downfall from the over buying region which took prices in the normal zone.

Ayush Malviya
Ayush Malviya has recently joined as a technical market reporter for Thecoinrepublic- the Leading cryptocurrency news site. He believes that there is a broad scope in Crypto market and blockchain. Thats why he loves to gather knowledge about it and like to analyse the market pattern.