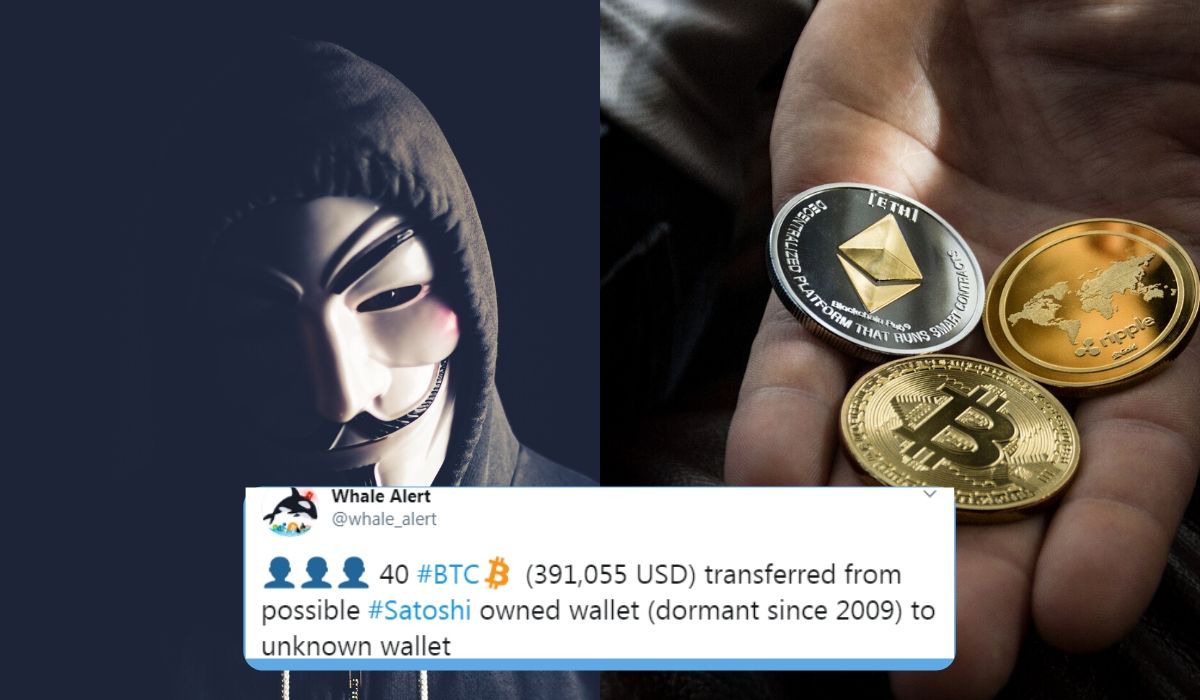 The crypto tracking Whale Alert company has staggered the crypto market today by reporting a huge amount of Bitcoin (BTC) transfer from a bitcoin wallet that was inactive for 11 years.

Does this suspicious transaction correlate with Nakamoto?

The BTC was mined back in February 2009 and remained latent till now.  However, it was highlighted today when it was suddenly sent to two anonymous addresses in a single transaction.

Vintage #Bitcoin Alert ? * 40 #BTC (391,055 USD) transferred from possible #Satoshi owned wallet (dormant since 2009) to unknown wallet. * The coins in this transaction were mined in the first month of Bitcoin's existence. .. * * Crypto Enthusiasts ,could this be the real Satoshi Wallet? This wallet is one of the oldest wallet in bitcoin history. Btc has not left here, for the past 10years. Now the coins have been moved to an exchange. This caused to panic sharp drop in bitcoin prices * . https://whale-alert.io/transaction/bitcoin/cb1440c787d8a46977886405a34da89939e1b04907f567bf182ef27ce53a8d71 . * * ⛏ Blockchain data has recently revealed that one of the first bitcoin ever mined has been moved to a new unknown wallet after 11 years of being dormant. And the crypto community is in shock. – – ?Many sources are linking this to satoshi nakamoto himself , but our research led us to believe it’s just an extremely early adopter who arguably might have the strongest hands in the world.- – ? ?Turn on post notifications – – Trade 32 crypto’s 24/7 with www.cryptorocket.com – .Satoshi Nakamoto ??????? . #Binance #BTC #BNB #cryptocurrency #Crypto

Moreover, a crypto speculator Joseph Young stated that the person or group behind this transaction has close bonds with the creator of Bitcoin, Satoshi Nakamoto.

That's just one month after first bitcoin block was mined. There is not a lot of people who can do this, perhaps close associates of Satoshi.

My question is why, not who, is sending 50 BTC for the first time in more than 10 years.

Besides this, Luke Martin from Venture Coinist believes this is due to the sudden fall in the price of Bitcoin.

Some $BTC from 2009 just moved and it didn't take long to spook the market.

In the race of tweets, the CEO of Blockstream Adam Back stated that the traders should relax.  He added if Satoshi was selling coins, then it is a possibility that he would sell his most recent mined coins. As per him, the owner of the anonymous wallet is maybe an early miner.

people need to chill. if Satoshi was selling coins, surely he would sell his most recently mined, and so most anonymous first. plus this patoshi research is pretty much guessing, probably he has less coins than people think, and you'll be doxing random early miners wrongly next.

The official account of Whale Alert on Twitter has exposed many large transactions extending from 145 BTC to 5,000 BTC. Also, it stated, 5,000 BTC, transferred to an anonymous wallet from Bitfinex exchange.

Thus, it can be assumed that whoever is moving Bitcoin to anonymous wallets certainly has some very strong hands.