The domestic distribution of “Klay”, a cryptocurrency issued by Kakao, Blockchain subsidiary Ground X gathered momentum in the trading market. This happened after ‘Jidak’ a cryptocurrency company that announced its assistance. Following the footsteps of Jidak, the leading cryptocurrency exchange of South Korea, Coinone announced the listing of Klay for trading against won. 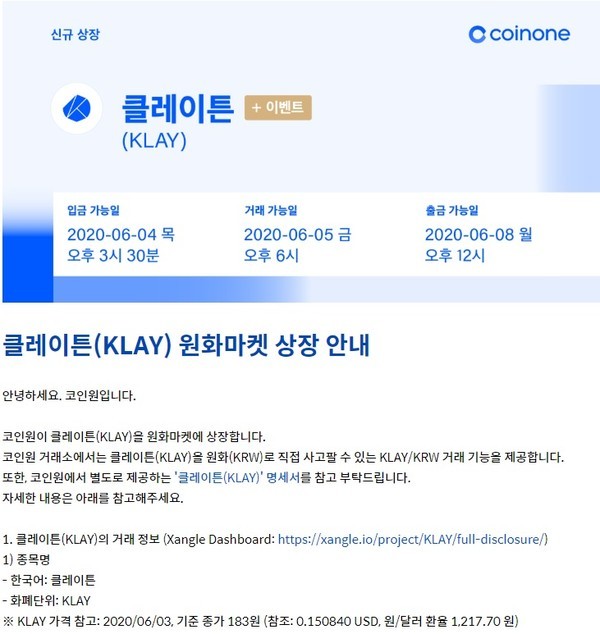 Difficulty surrounds in finalizing the legal definition and aspect of virtual assets. Further, the economic decline in the domestic blockchain development trade is making the government distressed over the conjecture of money laundering. This has maintained a negative impact on virtual assets for the past two years.

Despite this, Ground X did not abandon hope. It tried to improve the operation for technology enhancement and regulations. This resulted in virtual asset wallet service, Clip. The government’s concern and speculations regarding the virtual assets along with progress in related legal documentation following the standards accelerated the launch of the wallet service Clip. In addition to the wallet, it also launched Klayton (Kakao’s own blockchain platform) which gained recognition in the global market.

On 4th June, Coinone, a leading cryptocurrency exchange in Korea, published an official statement assisting Klay trading in the Won market from the following day. Moreover, it is among one of the first leading companies (Bitsome, Upbit, CoinOne, and Corbit) to lend its support. It is presumed to expand the quantity of Klay distribution. In contrast to other companies, it authorizes deposit and withdrawal relying on real-name verification, acknowledged by financial authorities. Besides, 3rd June 2020 marked the launch of Kakao’s first cryptocurrency wallet “Clip”.

Initially, a medium-sized company, ‘Jidak’ introduced Klay to the Korean Won market and subsequently, another partner David, lent Klay its trading support. Even though the financial authorities bar the use of honeycomb accounts, both the companies are trading, using it.

According to an industry expert, “indigenous blockchain developers expect for the popularisation of blockchain due to the emergence of a large company called Kakao.”

EDITOR TCRhttp://www.thecoinrepublic.com
The Official profile of the Editor of TheCoinRepublic. News and articles published under this section are mostly public opinions.