When the “Crypto Winter” hit in 2018, many sceptics believed that it was the end of the road for Cryptocurrencies. The scams that came in 2018, saw many investors lose out on a great deal of money and its reputation too took a nosedive. In fact, E&Y released a market study in 2018, wherein it was observed that cyber theft resulted in loss of $1.5 million per month.

Now cut to 2020, the Bitcoin prices have rallied to create new records to hit the year high of $11,000 on August 2, further strengthening to above the $11,200 mark on August 3. This has made the Wall Street to sit up and take a look at Bitcoin and cryptocurrencies more seriously. Stats from CoinMarketCap shows that the percentage of total market capitalization of the Bitcoin is close to 67.98% at the start of January and still holding fort despite blip to 61% as on August 3. 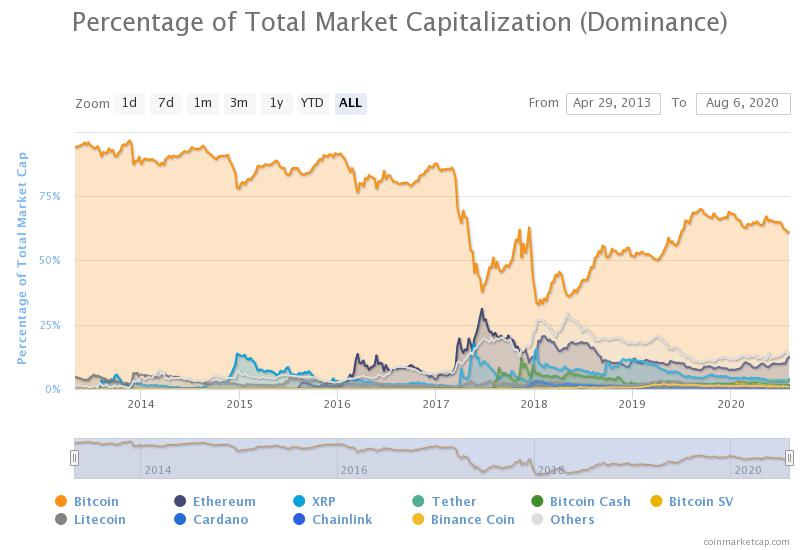 Chainalysis suggests that this could entice institutional investors from Wall Street to make bigger and bolder moves when it comes to the transfer of Bitcoins and Cryptocurrencies. The Chainanalysis team in its blog post observes that as of June, North America is the epicenter of this change with 90% of the cryptocurrency transfer volume coming from professional-sized transfers. Now one of the reasons for this could be that there is an increasing number of the growing class of institutional investors whose transfers account for the increasing dominance of professionals in the North American market since December 2019.

As per Coin Dance, the weekly Bitcoins volumes indicate that there has been volume worth $5.08billion as on August 1, 2020.

However, many believe that the crypto market is still fragmented despite its overwhelming support. In fact, as per a survey done by Fidelity Digital Assets, the cryptocurrency arm of Fidelity Investments, of about 800 institutional investors 74% of U.S. institutional investors find cryptocurrency appealing rest 26% still have lingering doubts. But with Wall Street showing keen interest, that number could swell. Kim Grauer, Chainalysis’ Senior Economist points out perfectly, that Wall Street’s involvement in the Bitcoin and Cryptocurrency market mature in terms of greater transparency and price stability.

Grauer expects the role of regulators and the exchanges could grow much more deeper and with better liquidity and price discovery mechanisms, the institutional players could be attracted towards it once the sense of transparency sets in.

Manu Shankarhttp://www.thecoinrepublic.com
Manu Shankar is the Editor of The Coin Republic, who oversees the content that is produced on the website. A former journalist himself, Manu has more than 15 years of experience in Journalism working with leading national dailies such as Hindustan Times, Indian Express, Mail Today and Online media such as NDTV, Rediff. As the Editor, Manu brings together his passion for blockchain technology, cryptocurrencies and fintech.