Zcash(ZEC) Price Analysis: Achieving The Long Term Target, What To Expect Next?

Zcash: Is There Any Steam Left In This Rally? 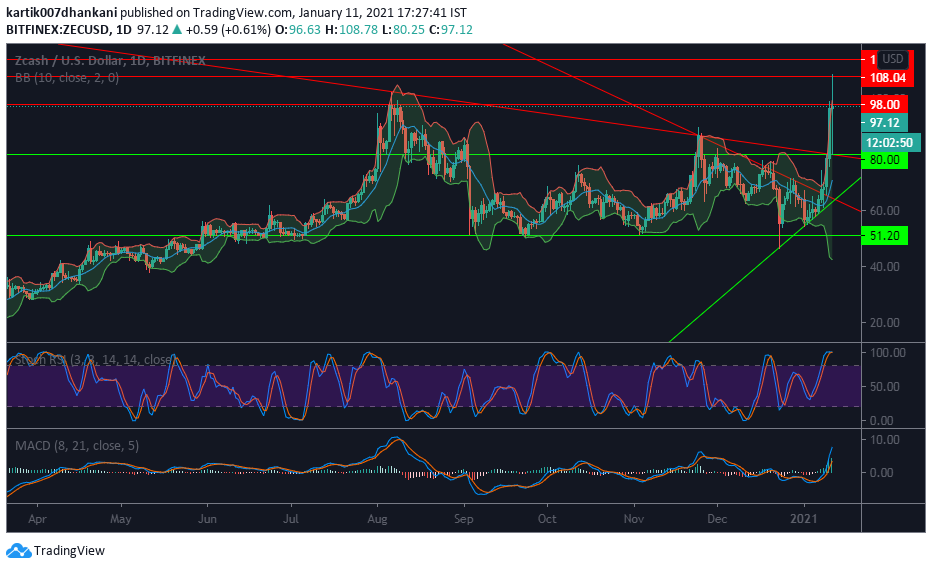 Zcash or ZEC/USD after giving the breakout rushed to test the high of 2020 within 2 days, however today the coin created a doji candle with long wicks indicating partial profit booking and fresh buying in the coin. The coin is so far sustaining the resistance but haven’t confirmed the breakout. A further movement can make the coin to test the highs of 2019 residing at $107 and $114.

The Bollinger Bands are wide open, signalling high volatility. The lower band is contracting which signals a reduction in selling pressure for the coin. The coin may sustain this resistance and with today’s fresh buying reach to next high of $107. The median (10 SMA) is at $71.

The stochastic is in overbought territory and the signal line is crossing down the slower line but it shouldn’t be treated as a selling signal unless the coin itself falls or stochastic falls below 80 levels.

MACD(8,21,5) is showing signs of weakness in the trend as the signal line and slow line have drifted apart making divergence which often cause consolidation or reversals. MACD lines are currently at the resistance of 6.22. A further surge is required to bring bulls back in the rally.

ZEC/USD(ZCASH) is at a crucial resistance currently. Any fresh buying or fresh selling will decide the future movement of the coin. Considering the market sentiments, it might see fresh buying.