Cryptocurrency channel “CryptoWendyO,” run by Wendy O, has experienced a video takedown of her live stream on an incoming Bitcoin price drop. Wendy has appealed the video takedown and called out for help to YouTube on Twitter, also stating how unfair it is that the YouTube algorithm fails to recognize what content qualifies as compliant to platform guidelines and which ones don’t. 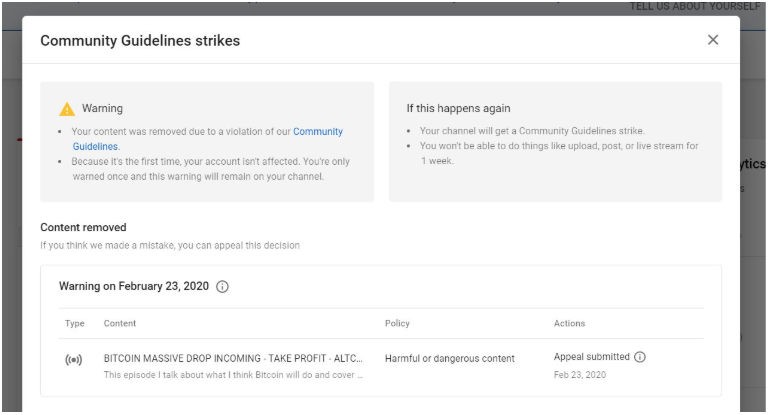 Wendy O, who is also the host of cryptocurrency content network CoinHQ.tv conducted a live stream on the current trajectory of Bitcoin and some other altcoins and predicted a massive price drop coming to the popular cryptocurrency.

The live stream then got flagged by YouTube, stating harmful or dangerous content, and her channel received a warning. Since this was the first warning issued for a community guidelines violation to her channel, no action would be taken.

Still, if another warning got issued, she would receive a community guidelines strike that would ban her channel from posting, uploading, or live streaming for a week. With three such strikes, the channel can get banned entirely from any further presence on YouTube.

Since the video was taken down on February 23, the appeal submitted by Wendy seems to have been resolved and the video is reinstated on her channel as of press time.

YouTube has had a negative history with cryptocurrency and blockchain content on its platform. A number of cryptocurrency-related content faced deletion from the platform since December 2019 with the same citation of “harmful and dangerous content” as the community guideline violation.

The company later admitted that the deletion was a technical error after a strong backlash from the community, but Google, in general, has had a rough past with cryptocurrencies, banning all crypto-related ads from their advertisements program and also deleting crypto-apps from the Google Play Store.

YouTube is the largest content sharing platform on the planet, and even the smallest disruption of a creator’s content can highly affect their revenue flow. And since, for most, YouTube stands to be a source of income, such a disruption can be highly damaging.

The company has been called out by not only crypto-based creators but also by content creators all across the platform for its weak algorithm that has taken down numerous famous videos under false guideline violation claims.

If the company doesn’t make stronger efforts to fix the clearly-broken classifier that sorts these videos, this can be very damaging to the company’s reputation as more decentralized content sharing platforms like LBRY are on the rise.