BCH.TOP CEO Bet $1 Million Worth Bitcoin On The BCH Price With Bixin CMO

Xiong Yue is a CMO of Bixin which offers a wide range of Bitcoin-related services and “ 巴别塔自由主义研究社 创始人 知名财” and a well known financial blogger in china. 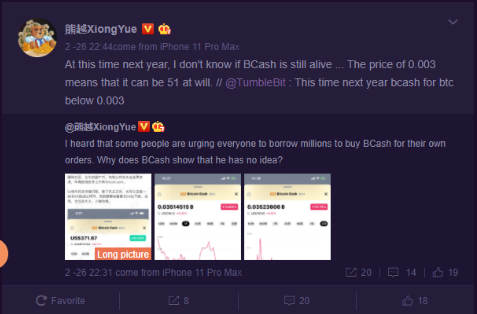 He criticized BCH and slammed it by saying that he is not having any idea about how BCH “Bitcoin Cash” is in the market with the price 0.036 and by this next year BCH for BTC will be far below 0.036

And he also stated that he heard some rumors that people are urging everyone to borrow millions to buy BCH just for their own orders.

It triggered Jiang Zhuoe, Founder of China’s biggest mining pool BTC.TOP.  He quoted Xiong Yue as shameless and a liar and the most bottom-line a can be.

He got furious by Xiong Yue remark asking that if he really believes that BCH will get below by 0.003 then why don’t bet on it.

Jiang Zhuoe placed a bet of 3,000BCH (Bcash)/108 BTC (Bitcoin) against the prediction made by Xiong Yue and said if I won pay me 3,000BCH and if Xiong Yue wins Jiang Zhuoe will be paying 108 in bitcoins.

Jiang Zhoue also made a sarcastic remark on the betting price that he can lower the amount of BCash he has to pay if he believes his bet is too big to pay.

The bet shows how much jiang Zhoue is confident towards his BCH as it is the fourth-largest cryptocurrency in the market cap.

Sateesh Swaminanthan
I am a techsavy, otaku and Crytogeek. loves to talk and write about latest tech, new anime and happenings in Cryptosphere.